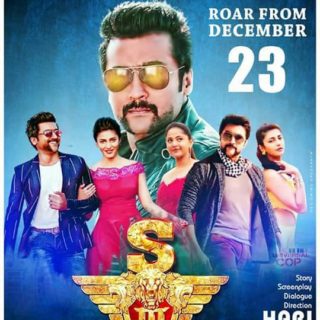 S3: Distribution rights for Singam III were sold at a record breaking price

S3 is Singam 3. The movie is third installment of the 2016 Tamil masala action film Singam II. It has the same team – writer, director, lead and co-stars and to some extent the story. This sequel is also written & directed by Hair, who’s also writer & director of the preceding sequels. Suriya and Anushka are in the lead roles and the supporting starts are Shruti Haasan and Raadhika Sarathkumar.

The movie has a replacement that is Harris Jayaraj replaced Devi Sri Prasad as music director of the film. Some new faces also joined the cast. They are Krish, Soori, Chaams and Robo Shankar and they are police officers in the movie. One new member Haasan will portray a journalist in the movie. Vivek who played police officer Erimalai in the first two movies, declined to work in the third installment citing personal reasons but according to sources, he was miffed by not getting a meaty role in the sequel.

DCP Durai Singam is called to unearth an evil plan to cause grievous injuries to the nation. Home Minister has full faith in the physical and mental strength of the DCP and the cop was given … Continue Reading

Dhanus is acting, writing and singing for his upcoming movie Kodi

Dhanush revealed that he will work in the film after it was announced in August 2015. He further maintained that he will play a legendary role of two brothers in Kodi. Trisha was selected for female lead. Her role is also important as it has a negative touch. There is a second female lead and she is Anupama Parameshwaran. … Continue Reading