Freak Show is a 95 minute show of determination by a high school boy who follows his heart despite being a student of an ultra-conservative high school.He’s like other boys but different from heart. His dress, tone and even the thoughts and taste are subverting masculine norms.

Here Billy Bloom takes the audiences to the journey of his high-school life that is no less than a mess of compulsions, aspirations and subversions.

He loves living his life in a carefree manner but calling him careless would be injustice to him. A friend of all, Billy Bloom enjoys seclusion more than anything else. And it isn’t he isn’t interested in making friends but the truth is that he’s brought up in an atmosphere where any child could feel suffocated.

Mom is the biggest blessing of god but Billy Bloom can’t say so as he got nothing and also learnt nothing from his mother. A drunk hard, his mother is unable to give the love and companionship he needs. He isn’t a gay by nature but he misses masculinity on many counts. By the time Muv, Bill’s mom, goes to a rehab center, Bill is ready to go for a senior-high semester.

The nurturing Bill gets from his mother is all about glamor and grace. It in intoxicating that brought drastic changes in his behavior. The change is evident from his introduction to high school where he receives thumbs down response. The unimpressive intro makes him a thing to laugh at.

Billy Bloom’s father is very straightforward with little or no emotions for his son or anyone. What he does is warning Bill every now then and creating fear in his mind. Many of his warnings proved true but each warning makes Billy firmer on his life’s goal.

It is Billy’s dream to become homecoming queen and nothing can stop him from running for the show. He faces trauma but does whatever he wants or finds fit. His journey to high-school and to becoming homecoming queen is a ride to a roller-coaster.

Here’s Billy Bloom going for homecoming queen in the poster. It shows the party in progression with lights on and the people merrymaking. Billy is going towards the center stage wearing a dark black coat. It seems that he is getting a pleasing welcome by the audiences. Name of the movie and is printed on the back of the boy and also there are pictures of other stars.

It is a high-school movie with a definite theme. Billy Bloom represents the students that suppress their hearts and minds only to meet expectations of their parents and teachers. 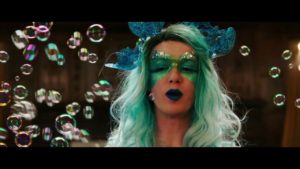