Good Newwz is really good news for Akshay Kumar as the movie is racing ahead in box office results. The Sunday collection of the movie was Rs. 162.10 crores and it is expected to reach the coveted Rs. 200 crores mark soon.

Varun Batra (Akshay Kumar) and Deepti Batra (Kareena Kapoor) are a posh married Mumbai-based couple but they are still waiting for a baby even after seven years of their happy marriage. After multiple failures to conceive naturally and constant prodding by family members, the couple decides to go for IVF. At the IVF center, they’re told by their doctors, Dr. Joshi (Adil Hussain) and his wife (Tisca Chopra), that their sperm was mixed with another Batras Diljit Dosanjh and Kiara Advani. From here, the film turns into a comedy.

The poster is given comic look by featuring both the couples of the movie. Also, the twist in the story is made visible by changing the wives. Both Kareena Kapoor and Kiara Advani are showing their baby bumps but the prospective fathers are confused about their babies. 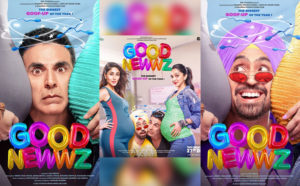 It is the fourth blockbuster by Akshay Kumar. Also, it is the debut movie of Taimur Ali Khan. The story of the movie is also an attraction. It is the first time that IVF is taken commercially by Bollywood.