Julie 2 Movie is the sequel of 2004 movie Julie. It is Deepak Shivdasani again with the same idea but with a different team. In 2004, he signed Neha Dhupia for the lead role of Julie but in the sequel, he is providing an opportunity to Sough Superstat Raai Laxmi. Julie 2 Movie will see debut of Raai Laxmi. She is a leading actress and model and she prominently features in Tamil, Telugu, Malayalam and Kannada movies.

Story of the movie is anybody’s guess as it is a sequel of Julie and Julie was story of a high profile prostitute. Memories of Neha Dhupia as Julie are still fresh in the minds of viewers. It is difficult to forget that pretty girl and viewers will certainly compare Julie 2 Movie with Julie Movie. The sizzling posture of the movie says more than it reveals. It is bolder than the 2004 poster of Julie.

Julie 2 Movie is written, directed and produced by Deepak Shivdasani. Principle photography began in September 2015 and was completed within six months. Shooting took place in Mumbai, Hyderabad and Dubai. First look of the posture was revealed on 14th February 2016 and the film is scheduled to be released on 4 Sep 2017.

The posture has Raai Laxmi showing her bare back. At end of the mage, there is Julie 2 Movie written and also there is a caption “bold….beautiful….blessed”. The bottom is filled with the entire team of Julie 2 Movie. The posture is white and the only image it has is of Raai Laxmi in bare back. She is trying to put a transparent veil over her bare back and also she’s looking behind as if she is aware that she is being watched. Raai Laxmi looking back while trying to cover her bare back with a thin cover looks inviting. 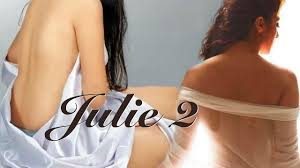 Why watch the Julie 2 movie?

Julie was a hit in 2004 and Julie 2 Movie is expected to repeat the success. It is a nice move for adults and seniors. A reason for watching the movie is that such movies are rare. It is one and only movie of its kind hence it will attract viewers.