Proud Mary is an action-thriller about a hitwoman transforming into a kind hearted woman. The society made her a lady don but the woman in her inner self was never subdued by the trauma she went allthrough her life. There’s so much to tell about the movie but the buzz in social media is all about confusion.

Excited to talk about the movie and especially her role, Taraji minces no words while elaborating the character of Proud Mary. She’s a hitwoman says Taraji before giving more details about the movie. The Golden Globe award winner actress has no comments on the question of why the movie wasn’t available for critics. It’s going to be released but no pre-release review could be published due to the cold shoulder attitude of Sony and Screen Gems, the production company.

Proud Mary is born orphan and is reared on streets where she learns toughest lessons of life. She learns to live when the whole world want you to die. She does street fighting and grows to become a hitwoman working for an organized crime family in Boston. Soon she becomes the most dreaded lady killer of Boston. One day she misses her target and the bullet takes life of a parent of a young boy. Her heart melts with sorrow on seeing the orphan boy. It is the moment that changes the movie.

Confusion about the movie

Hollywood is quite sensitive about black movies and for this reason no one is coming forward to say anything in favor of the movie. But Taraji is confident that the movie would be a trendsetter in Hollywood. She’s openly talking about equal rights for women in movies. It isn’t the first movie with a lady protagonist but here Proud Mary is the central character and the entire story is woven around the character.

What to expect from the movie?

Considering the big budget, big names associated with the movie and the storyline, the movie is going to serve lots of violence and explosions to the audience. Also there are tragic deaths, strong words and $exuality without that has become a staple of action movies.

It is a pink poster with only one face visible and that is of Taraji P. Henson. But the beautiful face is given a black background that shows Proud Mary in action with all her firearms on display.

Action is the biggest entertainer and here it comes with a beautiful face. The movie has a heart rendering story with a beautiful woman in the center. Also it has more violence and explosion and above strong language.

• Taraji P. Henson playing a hitwoman second time in the movie
• The movie looks similar to the movie Gloria
• Danny Glover and Margaret Avery are reunited in the movie
• Most scenes are shot in Lowell, MA 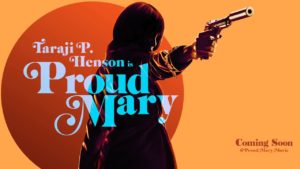