Theeran Adhigaram Ondru is a crime thriller never seen before on silver screen. Karthi is playing a daring cop Theeran Thirumaran taking on a deadly gang of dacoits. The story isn’t as simply as it looks as it has many turns. Taken from police records, it is real life incident unfolded on the silver screen. There are little chances of audiences rejecting the movie when it is launched worldwide.

H. Vinoth director of the movie is overjoyed with the story, starcast and overall performance of his team. It is his third movie as a director and he’s confident that the movie will do well at box office. Aware of the technical glitches, H. Vinoth maintains fine balance between confidence and loose talk when talking about his movie. He’s confident that if the audiences overlook a few glitches, they will like the movie.

A gang of dacoits from north India attacks wealthy families of south India. It breaks several homes, kills families and plunders their wealth. But there is no clue of the dacoits. Unable to nab the culprits, the police have to close the case without completing investigations. The cases remain unresolved and the dacoits are free to loot and plunder vulnerable families.

Karthi enters as a daring cop assigned with the task of keeping a tab over the activities of the dacoits. The gang attacks farm house of a local MLA after which the government decides to nab the gang.

A determined Karthi starts with tailing the gang to find their hideout. Since it is a real story, there is lot of excitement. The story tells how police worked out the case and nab the culprits. Smart dacoits leave no trail to follow but Karthi sees their footprints and follows them to their hideouts.

Good and Bad about the Movie

It is a real story but it is told in the traditional filmy style. Karthi impresses as a daring police officers but his soft side contradicts his tough image. He’s seen romancing and also there are regular family moments. Also there is no need to showing Karthi as a sacrificial goat as he loses everything in the battle with the dacoits. 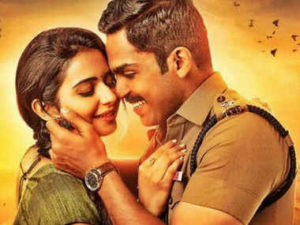 A furious Karthi is aiming his loaded pistol at the gang but he looks unsure about his target. In the background there is an old building that could be hideout of the gang. Name of the movie is written on bottom.

Why Watch the Movie?

It is an action movie based on real story. The story is from police files and it is one of the most nerve chilling cases of crime. Karthi fans will be delighted to see their favorite star in khakee.